For me, it was more shocking than discovering Santa wasn’t real.

Despite all the Christmas pageant memorization I endured growing up Lutheran, it wasn’t until high school when I realized that the Three Wise Men WERE NEVER AT THE MANGER.

The whole nativity scenario my classmates and I had played out each Christmas Eve for proud parents and grandparents was historically inaccurate.

I never looked at the crèche beneath our tree the same again.

I believed the Magi should be placed at least two to three feet away from the scene, every 12 inches representing a year of never asking for directions, camel breakdowns and accidental detours during meteor showers.

How had tradition taken the place of truth?

11 On coming to the house, they saw the child with his mother Mary, and they bowed down and worshiped him.

But no matter how long it took the wise men (or how many there actually were for that matter), they showed up. And they are part of the reason we give gifts today.

No matter what these wise men actually were–astrologers, scholars or kings–the truth is that they risked their lives and left behind their homeland to honor a child they knew little, if anything, about…except that he was worthy of their greatest gifts.

Not frankincense, myrrh or even gold, but their presence.

When I think of the traditions my family has kept over the years, especially at Christmas, they focus on showing up–being together and still loving each other when all the personalities are crammed around the same table.

Should we really be surprised the Magi at the manger version stuck with us for hundreds of years? Tradition is important, especially during holidays or times in our lives when we are feeling alone or uprooted.

When my daughters and I moved into our own place nine years ago, I bought a $3 Christmas tree at a resale shop. The branch on the bottom is still held together with a pipe cleaner. Even though we have enjoyed a “real” tree the past two years, the girls won’t let me get rid of that raggedy tree. 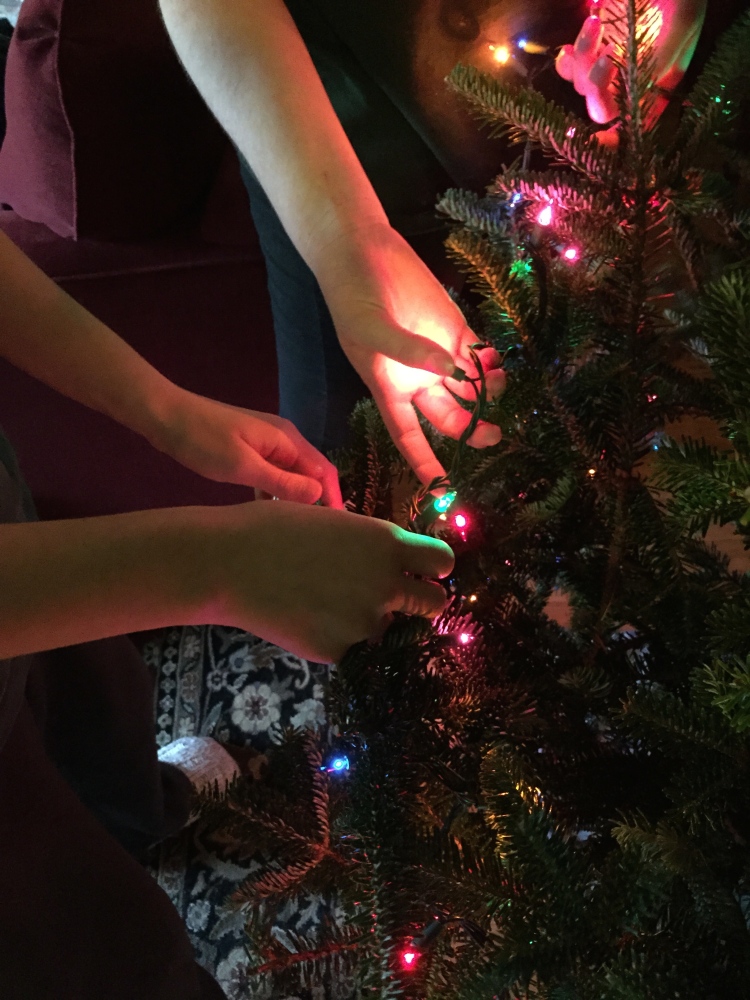 Like the beautiful balsams severed from their place in the snowy woods that we decorate with lights and trinkets, we sometimes dress up in lovely sparkles to take our minds off of the loss of our legs.

That year, I also bought a crèche made out of twigs. In it, we place the figures we salvaged from our old house or have collected over time.

Like the three baby Jesuses (Jesi?), affectionately known as Father, Son and Holy Ghost. Mary, Joseph, the resting cow and the one surviving lamb. A fuzzy llama and two raccoons from North Carolina.

Resting over the historically, ecologically, and dimensionally inaccurate scene is an origami “dove.”

And the Three Wise Men? The Magi from the East? We have ever only had one, so we improvise. Joining old “Melchior” this year are Gandalf and Pez Santa.

We don’t mean any disrespect to Jesus. The scene is representative of our family’s weird sense of humor, of our past displacement and new foundation, and mostly, of our acceptance of the hard-to-believe-it’s-true gift that we can approach the King just as we are–wise man or lowly shepherd.

And besides, it’s tradition.

Linking up this week with other #wholemama writers reflecting on tradition at Erika Shirk’s Overflow blog.

10 thoughts on ““Do you know what I know?” The truth about the Three Wise Men”

Early morning writing before the regular work day begins... This is only a temporary view, but I’ll take every bit of inspiration I can get. What is inspiring you to keep doing the work?