I filled in my name big and purple on the adhesive name tag and stuck it on my shirt, the one with the bold graphic of a Japanese animation character I figured the kids would like. Anime always serves as a good conversation starter when I lead writing workshops at the local teen center.

There were 16 writers–the most I’d ever had—seated around the long wooden table. At each seat was a clipboard with bright green paper to write on as we explored ways to build good characters in our stories. And at each seat, an adhesive nametag.

“DJ” already had hers stuck to her forehead, her strawberry hair swooped down on either side. 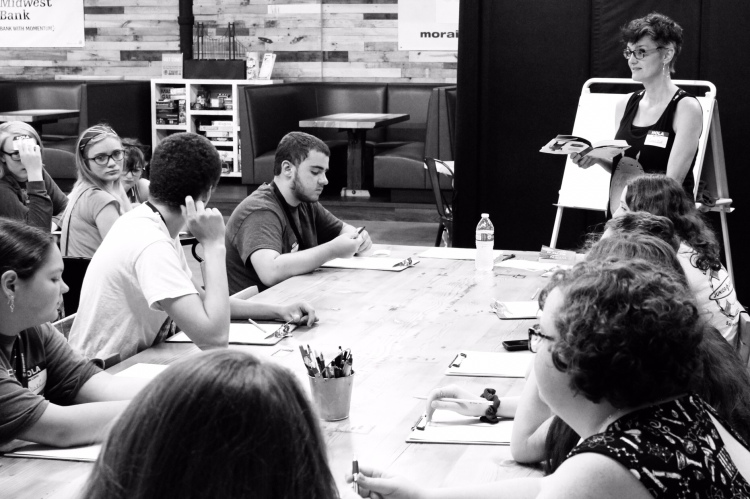 As much as I hate the “tell us your name and something about you” exercise–one that even happens in boardrooms with people in suits and nametags stuck properly to their lapels—I planned for this time of introduction to be a little more creative.

In addition to discussing how names say something about fictional characters…and about us…I had come up with the brilliant idea to let each student offer a fictional name instead of sharing their actual name. That would be fun, right?

“DJ, take that off your head and write your real name,” the staff person instructed, grabbing an extra nametag from the table and handing it to the girl.

“But I hate my name,” DJ said, peeling the bold and proud pseudonym from her forehead slowly, like a bandage from a wound.

“We need you guys to use your real names,” the staff person explained, marking something on his own clipboard. It didn’t have bright green paper.

From where I sat, I caught the girl’s eye roll.

So much for my icebreaker game. I wasn’t going to be a 50-something-year-old rule breaker in an anime t-shirt and Converse sneakers. So I compromised.

“Let’s start with introductions. Tell us your name . . . and, if you want, tell us what your fictional name would be if you had one.”

“Angus Olive Fiorella, because “Angus” is my dad’s middle name since he’s Scottish, and Olive is my mom’s middle name, and Fiorella because my grandmother is from Italy and her name is Fiore which means flower, and when I was born she called me her little flower. …Someone told me it’s stupid to have three first names.”

“My fictional name would be Maximillian the Magnificent, because that’s my character’s name.”

The girl on my left leaned closer and whispered, “Does Celeste mean the sun?”

“My name is Danita, but I hate it, so I like Danny or DJ!” DJ pointed to the wrinkled nametag stuck once again to her forehead.

After all the introductions, we talked about character development. What makes a character who they are?

What makes you who you are?

Hands popped up. The kids offered suggestions in the categories of beliefs, environment, physical traits, culture, family relationships, and, of course, names.

We would focus on family relationships next, but we continued with names and nicknames—how they have cultural meaning, how they connect you to family history, how they come with a backstory of choosing. . .

. . .and for writers, how we can use them to tell the reader something important about the main character.

In his Newbery Medal award-winning novel The Crossover, Kwame Alexander, opens the book with Josh, the main character, telling us his name and explaining how he got the nickname Filthy McNasty.

What did we learn from less than 300 words written in free verse? I asked this after a couple of the kids had read the sections aloud.

That he’s messy and eats in bed.

That he is embarrassed by his nickname. But as he gets older and starts “getting game,” the name takes on a new meaning.

And maybe most important…

That Josh has a good relationship with his father and respects and loves him despite the usual generation gap/parent-teen stuff. And that maybe this foreshadows how this nicknaming and relationship will eventually teach change him, provide him with a deeper understanding of who he is, in the context of his family and because of–and in spite of–his name.

Beyond helping the kids become better writers, beyond teaching them techniques for developing more complex protagonists, I wanted Fiorella and Max and Celeste and Danita/Danny/DJ to understand something. . .

. . .about the importance of naming characters, yes, but also something about themselves, and maybe even about each other, as they shared their names and their stories—both the real life ones and the fictional ones, but all of them true.

2 thoughts on “Hello my name is…(and why it matters)”