At 7, my son is in earnest. Gripping the back of the seat as we drive to the grocery store, he asks, “What should I be when I grow up?”

This is not a “why is the sky blue?” kind of question. The almost pleading tone in his voice begs me to answer; not a “well, uh, you see…” kind of answer either. THE answer.

This may be a pivotal moment in my parenting of this being, not really a boy at all, but an Energy in boy form that I must help to channel.

This is the list that began to form in conversations among my family members about this child’s future path. (Three years later my mother buys him the book Super Lawyers for his 10th birthday.)

I’m weighing my answer. It will say something to him about what I think about him. What I believe him to be capable of.

When I’m helping him with math homework, he wonders why I sometimes have to go back a few chapters to review. Don’t I know everything? Now I’m slow to answer again. But it’s not because I don’t have an answer. Some of his gifts are already very evident.

I glance sideways at the small hands gripping the top of the front seat as we drive. I remember those fingers four years earlier curled over the pulpit during my friend’s wedding rehearsal. At 3, my son is hidden behind the wooden lectern. Only his hands are visible, as with a pronounced inflection that makes me wonder if he has been tuning in to the black, Southern preacher early on Sunday mornings, he proclaims “Haaaa—lle—LU—jah!”

“You can be anything you want to be,” I say. This is not an answer.

I decide this is not a hard act to follow but want to acknowledge his selections. “Yes, those are all possibilities,” I assure him. But I’m thinking of his entourage of friends and how we’ve taken to calling him the Pied Piper.

I’m thinking of the way he has of conversing with complete strangers, mostly adults, who look first startled then amused then engaged.

And there are the capes. He has several that he wears around the house and even one for the grocery store. In fact, he has insisted on my wearing one, so I tie a red handkerchief on for our trip to the store.

So if I am the mother of a super hero, I guess that makes him… 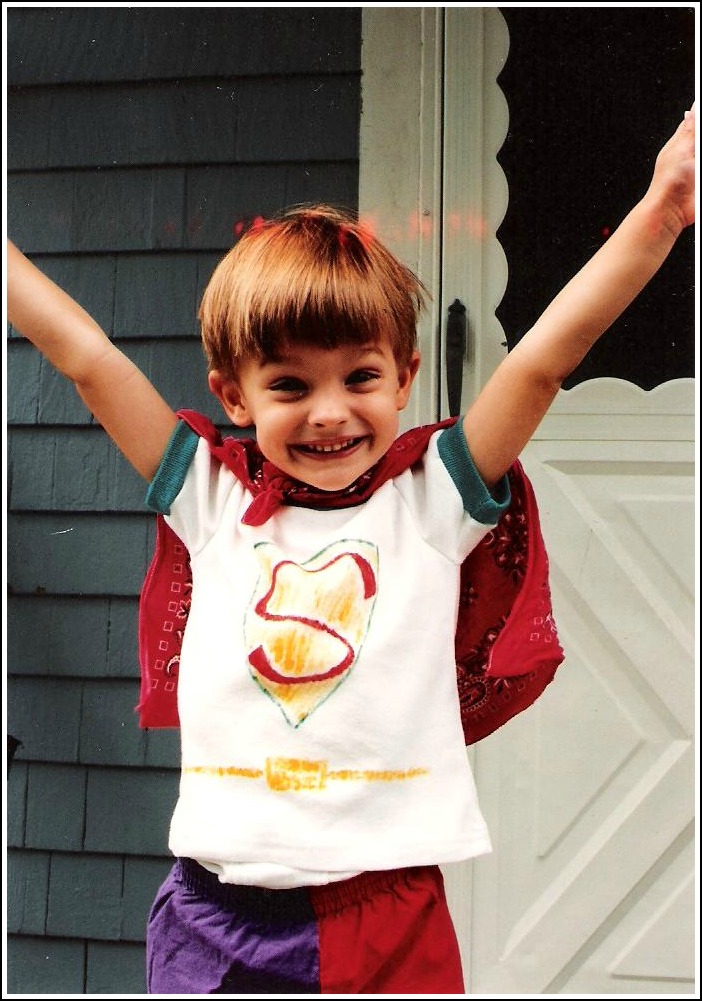 A super hero. Will telling him he can be a super hero make him think he can jump off of the roof?

“Use your powers for good,” I tell him. (Not for the last time.)

Over the years, I have been fervent in encouraging the gifts I see in all three of my children. In truth, I thought even then he would be a leader, but I knew that wouldn’t resonate with him at 7.

Now, at nearly 22, he is a theology student and a youth group leader.

Last year he texted me late at night. “What do you think God is calling me to do?”

I text him a long answer but want to simply say, “You are a leader.” Will telling him he is a leader make him think he can jump off the roof and others will follow?

I don’t have THE answer, just like I didn’t before. At least not the definitive one he’s looking for again. I can only review the past few chapters and tell him again what gifts and talents I recognize and that he should use them for the good of others.

Actually, I don’t believe there is a THE answer, except for maybe d. all of the above. There are many things he can do and will do. To steal advice from former Franciscan priest and writer Brennan Manning, I will tell my son to DO THE NEXT THING IN LOVE.

So, Son, this is my answer:

If you must jump off of a roof—with or without a cape—do so to save a another.

If you lead, you be led by love first.

If you defend or preach or make pizzas for a living or for a moment when it is needed or for the purpose of answering “yes” when God calls you to a lifelong task, do all of the above in love.

4 thoughts on “What He’ll Be When He Grows Up”